By Erin LuurtsemaJuly 15, 2022No Comments 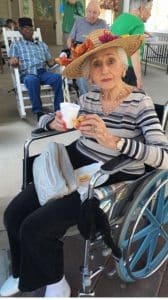 The year was 1922. Warren G. Harding was president. Air conditioning and telephones were luxuries that not everyone could afford. It cost 7 cents to go to the movies. If you wanted a movie with sound, well, that didn’t exist yet. This was the world that welcomed Mary Peskoff (née Weingrad) on July 27.

Born in Philadelphia, Mary was the youngest of five. She had two brothers and two sisters; tragically, one sister died in childhood. The family lived on Myrtlewood Street in the Strawberry Mansion section of Philadelphia. Mary was very close to her siblings and cousins who lived in the area. She attended Simon Gratz High School, a giant Gothic structure built in 1925. Her future husband, Max Peskoff, grew up in the area too.

Upon graduating high school, Mary worked as an administrative assistant and a bookkeeper. It was the start of a career that would last well into her early 80’s. “She’s always worked, even if it was just part-time,” said daughter Joanne Peskoff Bear. “She was always an active hard-working person and very independent.”

Mary fell in love with Max Peskoff, and the pair married in February 1946, just a few months after the end of World War II. She was not quite 24 years old. Max worked in the family business, Park Hardware, with his father and brother. Mary worked for an accounting firm in Philadelphia. 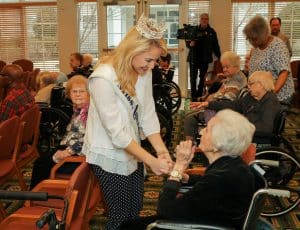 Even when the kids came along, Mary continued to work part-time. The family lived in Broomall, Pennsylvania. They spent summers in Atlantic City, often staying with aunts and uncles and cousins. “My parents liked to entertain,” said Joanne. “We always had summer BBQs and holiday parties, New Year’s Eve parties, birthdays, etc.”

When they became empty nesters, Mary and Max moved to the Jersey shore. Mary was in her late sixties when she became Executive Assistant to the head of Internal Audit at Bally’s Grand.

They lived in Margate Towers and Mary enjoyed playing canasta with a group there. But just five years after they moved to New Jersey, Max was diagnosed with pancreatic cancer. He passed soon after at age 71, and Mary was left on her own.

She focused on her work to keep busy, moving from Bally’s Grand to a variety of administrative assistant 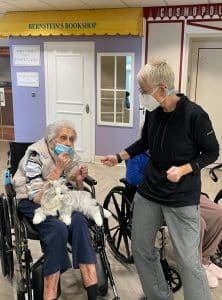 jobs over the years. She worked well into her 80s. Her last traditional job was giving out food samples at Sam’s Club. “My mom was always active,” said Joanne. “She would help out other friends who were older. She drove until her early 90s, and would run errands for them.” She stayed in Margate Towers as long as she could, and spent a short time at Shalom House.

There came a time, though, when Mary couldn’t do it on her own. That’s when she and her family decided on the move to Seashore Gardens Living Center (SGLC) in 2015. “She had some friends there, which definitely helped with the transition,” said Joanne. “She also had a wonderful roommate, Mary Hood. They were thick as thieves.”

“Seashore Gardens does an amazing job caring for the residents,” said Joanne. “My husband and I are grateful for the hard work and dedication of the Seashore Gardens staff.”

Joanne donated several automated cats and dogs for the residents at SGLC, and her mom brings her cat everywhere. She also enjoys music and loves when performers come to visit.

For the woman who has always loved family, Mary is surrounded by love. She has daughter Joanne and son-in-law Les, as well as son Larry and daughter-in-law, Wen. She also has three grandchildren: Larry’s daughter Brittany and Larry and Wen’s sons Cody and Casey.

Les in particular promised Mary fireworks for the big birthday. “I like fireworks,” she said. As for Joanne and Larry, their mother’s 100th birthday marks a wonderful time to reflect on her life and the lessons that she taught them. “Get a good education and work hard.  Love your family and friends.  Be a good person in the world and be kind.”

That’s a legacy of which she can be proud.